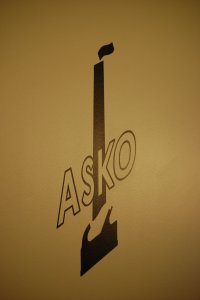 I visited the Lahti Historic Museum last weekend at the same time I was picking up an Eames Elliptical table. The city is known as the birthplace of Asko Avonius, who later founded the company which bears his first name. It was a retrospective from 1950 to 1970’s and so reflected the golden days of Asko. All the great designers were represented and you got a great overview. Even I saw some things I’d never seen before so if you’re in the neighborhood pay it a visit. 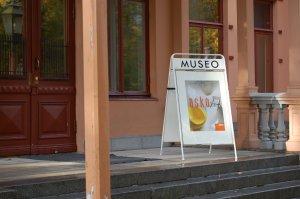 The Fanett chair and Aslak chairs in the background. Designed by Ilmari Tapiovaara.

Chairs by foreground to background by Ilmari Lappalainen, Ahti Kotikoski and Olli Borg.

Magnificent old posters by Asko. Please write to them – info@indoorgroup.fi – and demand that they either put the print files on their web site or sell the posters at the Asko shops. 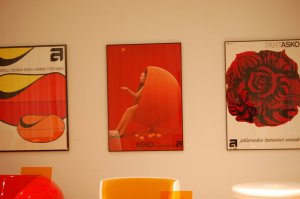 A great selection of Wirkkala tables. Some of the table models were designed by Lappalainen but the table tops are Wirkkala’s. The table tops are either made with intarsia or with rhythm veneer (that you made propellers out of in the old days) sawed in different ways to create the
patterns.

Anna watching the Lulu chair by Tapiovaara for the Marski Hotel in Helsinki. Behind it is Olli Borg’s chair with a black vinyl cover. And furthest in the back is one of the chairs from the silver Wing (Hopeasiipi) series by Esko Pajamies, designed for the Helsinki-Vantaa airport. 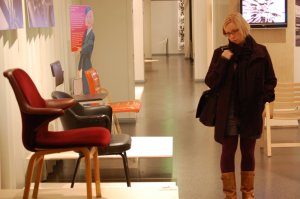 This is a two-seater sofa from the Bonanza series (yes the name was inspired by the series with the same name) by Esko Pajamies. It must say that this is perhaps the most unappreciated piece of furniture in Finnish design history right now. It was ridiculously expensive when it came in 1965 (equivalent of 2 month salaries my parents told me) and to my knowledge it was the most exclusive furniture you could buy at the time. They were even more expensive than similar Italian, Danish, Swedish sofas or even Kukkapuro’s Ateljee sofas (I checked). And now you can buy them for practically nothing. Some things don’t just stand the test of time. But I love them, I grew up with them and some day I too will have them in my home.