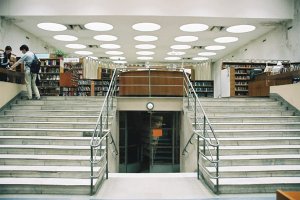 The library was originally drawn in the late 20’s but was completed in 1935. When built, it was on the Finnish side of the border but after WWII it remained on the Russian side. Damaged during the war it was left to further deteriorate, and among other things the innovative wood ceiling was destroyed. It has been repaired to some extent from -03 to -08 and is currently on several lists of endangered and culturally important buildings.

The fate of the blimp Hindenburg is known to most people, but have you seen the passenger accomodations that were lost in the disastrous fire? The interior was decorated by the architect, Fritz August Breuhaus.
Pure functionalism was in the rage in the early 30’s and bent steel furniture came to symbolize a more simple and cleaner living.