…and it is in the humble opinion of this narrator that this is not just “Something
That Happened.” This cannot be “One of those things…” This, please, cannot be that.
And for what I would like to say, I can’t. This Was Not Just A Matter Of Chance.

This is a quote and scene from one of my favourite movies and is tells about how things connect in funny ways. Strange things happen all the time but most often we don’t find out about them. Here are some coincidences that we did hear about and they prove that reality is often stranger than fiction.

The dead prime minister and the Sucksdorff gun

The late prime minister of Sweden, Olof Palme, was shot and killed in the center of Stockholm in 1986. The killer has never been found and neither has the gun. The police has however concluded that Palme was shot with a .357 Magnum and they’ve had a couple of leads. One of the strongest ones was a Smith & Wesson Model 28 once owned by an award winning filmmaker. You see, director Arne Sucksdorff not only won an Oscar with his short film Symphony of a City in 1949, but he also owned a Magnum until it was stolen in 1977. The gun was then passed on from criminal to criminal until it one day ended up in the hands of small time gangster Sigge Cedergren. He would later claim that he lent the gun to the man that was convicted (and later acquitted) of Palme’s murder, Christer Pettersson. The gun hasn’t been tested yet so it remains unclear whether it’s the right gun.

The serial killer with outstanding debt

The man standing in the doorway is Ulf Olsson, and he owns some people money. He’s participating in a 1993 documentary by filmmaker Tom Alandh about debt collecting. He also murdered two people a couple of years before the documentary was filmed. Mr Olsson committed the murders of Helen Nilsson and Jannica Ekblad in 1989 but he was only convicted in 2005 after some tips and a DNA analysis. He hung himself shortly after the conviction. Because of Olsson’s strong hatred for the former prime minister Olof Palme, he was at one point a suspect in that investigation. You can’t make this stuff up.

The unlikely demises of Mr Perkins and Mrs Berenson

This clip shows actor Anthony Perkins and his wife Berry Berenson talking about how they met. The story of how they parted is equally interesting. Perhaps not a strange coincidence but the two met death in a way that most people don’t know about – Anthony Perking, perhaps best known for starring in the movie Psycho and less for being bisexual, died of aids and his photographer wife was killed nine years later when her plane hit the North Tower of the World Trade Center in 2001. 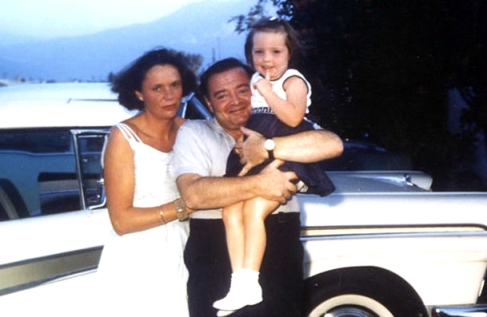 Ok, so the late actor Peter Lorre was not a serial killer but he did play one quite convincingly in the legendary German film M from 1931. What makes this a bit eerie though is that his daughter Catherine, born in 1953, happened upon the infamous Hillside Strangler killers dressed as police men in 1977. They had stopped her with the intent of abducting and murdering her, but let her go upon learning that she was the daughter of Peter Lorre. Apparently they were fans. Catherine did however pass away at 32 due to complications with diabetes.

The one in a million shot

In Södertälje, Sweden in the summer of 1991, Mikael Nilsson was killed while driving his car through a forest. He died from a gun shot wound to the temple but the shooter was standing 2,5 km away. It was later found that the military was conducting a machine gun exercise and one of the bullets had somehow made its way through the forest without hitting any trees. When the bullet finally reached the car its velocity was so slow that the car window would have stopped it. But Mr Nilsson had his window open. The odds for getting killed this way are slim to none. The military personnel involved were fined for the incident.