A table lamp from the 40’s or 50’s. Don’t know who designed it or even where it is from. I removed the paint (it had been first painted in blue and then poorly in white) and the original black paint somehow remained. Had to repaint the cast iron foot though and oil the wooden handle. Works and looks great!
10 €

A Remmi chair from the 70’s by Yrjö Kukkapuro. Made by Haimi. Original brown leather in excellent condition. In fact it looked as if it had never been used. Amazing.
60 €

Eight original Bertoia side chairs. They were in a terrible shape though so I’ll have them repainted. The seller claimed that they were of a first batch ever produced but it is still to be verified.
75 € / chair 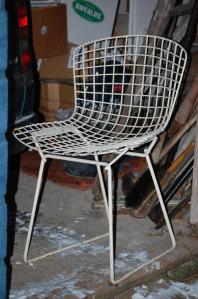 A Variatio chair by Yrjö Kukkapuro. In production by Avarte from -86 to -88 so they are a rarity. A future sought after piece of furniture if you ask me.
30 €

A Boman table by ‘B. Eriksson’ dated -45. I bought it in the spur of the moment knowing having seen a similar one somewhere. And yes, another table with a flower painting top dated -45 had been sold at a design dealer in Helsinki. That table was painted by Hilkka-Liisa Ahola – a well known ceramic artist at Arabia. There is however no references to a B. Eriksson in any books and neither the Arabia museum nor the industrial school of arts could help me. I’ve done some research of my own and I suspect it could be Birger Kaipiainen. This based on the drawing style and the shape of the B. Why he would write Eriksson I don’t know. If it is Kaipiainen’s were talking about a major find. Could anyone shed any light on this?
80 €

Four Italian booklets by Abitare. Lots of hand drawn images of furniture classics from the 20’s up until 1987 when these came out. Now I only have to find the rest of the series.

I helped out with some photography at a local elderly home and got these as a gift. They are Finel / Arabia containers with graphics by Esteri Tomula. Kindness always pays off.
Free 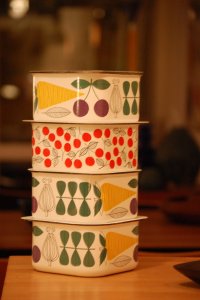 An “A” sign from the old Finnish Merita bank headquarters. I installed some led lights and a switch, and voila – we have a mood lamp.
40 €

Two poorly repainted Alvar Aalto stools. You can’t get enough of them as they are really useful for parties. One does wonder though how many have injured themselves standing on one of these three-legged wobbly things.
4 € 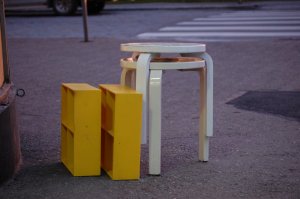 A large copper lamp by Stockmann Orno. I’m guessing Lisa Johansson-Pape or Yki Nummi. I’d go with the former. Copper is all the rage again since designers have started using the material in new products and this one will fit just perfectly in the living room.
5 €

A ceramic monkey by Arabia. Maybe by Michael Schilkin or someone else. He was just sitting there covering his ears and I was hoping there would be two more. But there wasn’t.
0,5 €

A set of Arabia Ruska for 10 people. Ruska by Ulla Procope is just right for those cold, windy autumn evenings when you just want to stay inside and drink tea.
45 €

An IKEA Vilbert chair by Verner Panton from 1994. The design was perhaps too radical for IKEA shoppers and not that many were sold, making them rare to find today.
25 €

Loads and loads of vintage design magazines and brochures from Sweden, Denmark, Finland, The US (mostly MoMA), Germany and Italy. I found them all at a thrift shop in Helsinki and they had been left there by relatives of a wealthy traveling family with a design interest. I sat for hours going through them and picked out about a hundred, but had to finally leave for an appointment. I’m going to scan some of them and add them to my web site soon but if anyone is interested in certain publications I’ll happily send them to you (no point in buying them at outrageous prices on Ebay).

A graceful table by Ilmari Lappalainen for Asko 1956. It’s quite rare I think.
5 € 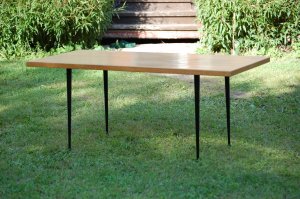 An art noveau side table by Louis Sparre marked with Borgå and the squirrel logo. It has the Finnish railways logo carved on the sides so it must have been specially ordered. It was reserved when I found it but the previous buyer hadn’t picked it up so they sold it to me.
10 €

A Danish Kevi office chair with leather seat. The seller claimed it was designed by Alvar Aalto. Must have been mr Aalto’s metal, plastic and leather period in that case.
50 € 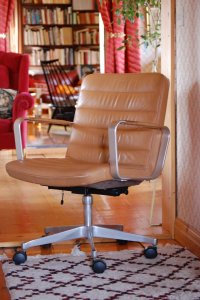 This one is not exactly design but it is a find nevertheless. The hockey club of a young Linus Torvalds who later became the founder of Linux, the free operating system. As some may know he was born in Finland and I bought it from his mother at a flee market in Helsinki. She was kind enough to send me a certificate of authenticity with an adorable picture of a young Linus.
10 € 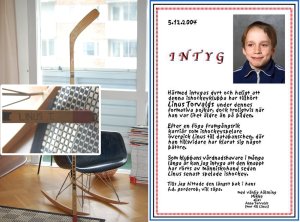 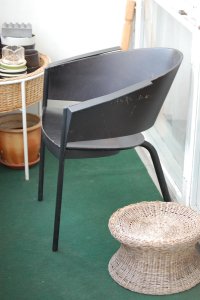 My worst miss was missing out on two Jacobsen Egg chairs for practically nothing. The ad is in Finnish so I’ll translate.
” Two Arne Jacobsen Egg chairs, 1956, some damages, fake leather, 130 € per chair”
I usually get up at 7:30 AM on Saturdays to read the paper and the classifieds. This one day.. this one day! I decided I’ll sleep and when I woke up at 9:00 I see this:

I threw myself on the phone but the line was busy. No wonder. Later in the evening, knowing they the chairs were sold, I called the number and an elderly lady answered. I asked her why she would put such a ridiculously low price on them and she just answered that she had gotten them in the 60’s as a gift an always felt ashamed by them. She didn’t like their style. I have never really gotten over it. And as you can see I kept the ad to remind me.

Three teak bowls by the little known Finnish designer Eino Mattila. The largest one is 40 cm across and I’ve bought them all at separate occasions.
5 € for the large one, 10 € for the middle one and 20 € for the small one.

A Nordmende Spectra Futura Radio designed by Rodolfo Bonetto. The guy who sold it to me was sure that it was from the 40’s. He just wouldn’t listen.
40 € 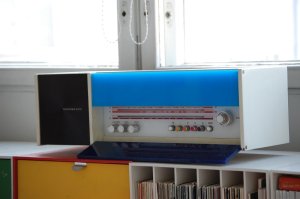 Four Arne Jacobsen 3107-chairs with armrests. Found them at an flea market in Ostrobotnia in 2005. The family I bought them from had about 20 of them from a passenger ship that cruised in the south of Finland.
140 € for all

A rare exhibition table by Antti Nurmesniemi (it turned out to be in bad shape though. I could actually have bought three of them, only a handful were made for exhibitions) Here is one in the home of the Nurmesniemis.
100 €

Two ‘Airbag’ chairs by Ilkka Suppanen from the first collection by Valvomo.
150 € 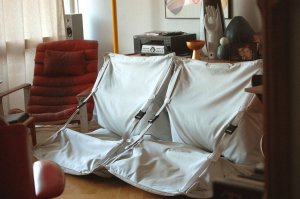 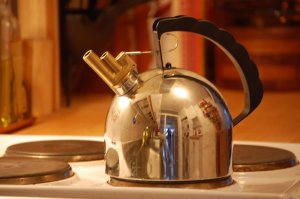 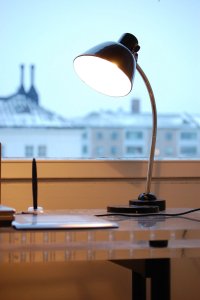 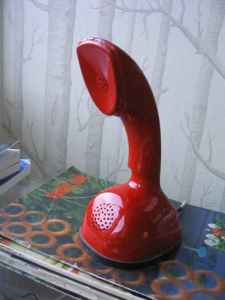 That’s all for now. But there’s lots more to show so check in soon.

And if you have any good finds of your own, do comment!